The Marginal Syllabus is moving into 2017 building upon a successful and meaningful first semester during the fall of 2016. Throughout the 2016-17 academic school year, the Marginal Syllabus aims to foster a participatory and open experiment in educator professional development through critical conversations about education and equity. The Marginal Syllabus primarily does so by convening monthly web annotation flash mobs. These flash mob conversations use the annotation platform Hypothes.is to provoke interest-driven discourse among educators and the authors of consequential and equity-oriented texts. This past fall we discussed digital redlining and information accessibility with Chris Gilliard (in August), curriculum design in a “writing race” course with Mia Zamora (September), critical and culturally proactive literacy education from Antero Garcia and Cindy O’Donnell-Allen’s book Pose, Wobble, Flow (October), and the politics and contradictions of educational technology with Helen Beetham (November).

The next Marginal Syllabus conversation will occur this Wednesday, January 25th at 6p ET/4p MT/3p PT with Christina Cantrill, Associate Director of National Programs for the National Writing Project. Join Christina – and some of participants in her ED677 course at Arcadia University – in discussing via annotation the first chapter from John Dewey’s classic book The School and Society. Visit our resources for additional information, including directions for using the Hypothes.is platform and joining the public conversation. And in the coming months, anticipate additional updates about our developing collaborations with the National Writing Project and other NWP-affiliated authors.

As much as we’re excited about moving forward into 2017, the remainder of this post looks back at what happened during 2016. The following table provides some additional context and descriptive statistics that help to summarize Marginal Syllabus activity from this past fall. The table was put together over a month ago, in early December, so the total number of participants and annotations may have increased just a bit (such is the case with Helen’s post Ed Tech and the Circus of Unreason). Nonetheless, a few notable trends emerge from this data and provide useful reminders about the ongoing design and facilitation of Marginal Syllabus conversations via annotation flash mobs. 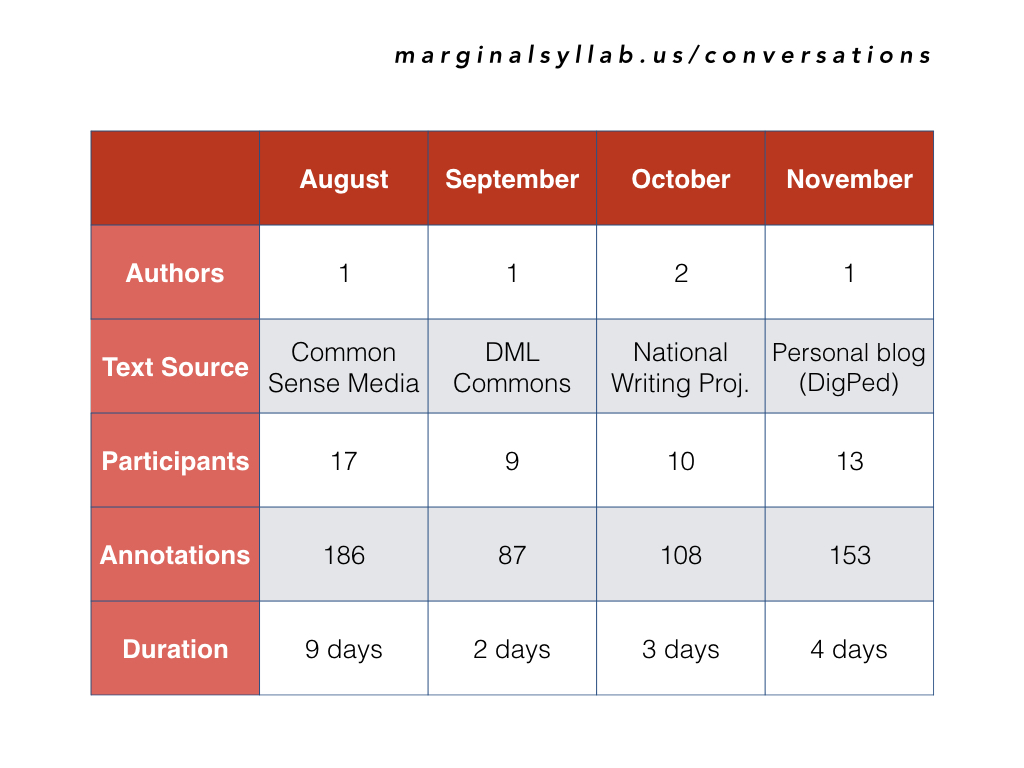 First, participation gets stretched over time. The term “flash mob,” by definition, connotes intense activity over a short period of time. In one sense, Marginal Syllabus annotation flash mobs echo related approaches to educator interest-driven and openly networked professional learning, such as Twitter chats (which occur at a designated time, last about an hour, and are facilitated following a set question-and-answer structure).

The activity of an annotation flash mob has also occurred for about an hour… kind of, but also not so much. Unlike a Twitter chat, participants have conversed based upon their availability, regularly annotating a text, interacting with the text’s authors and other readers, and receiving replies both prior to and after the designated flash mob. As noted above, sustained activity typically gets stretched across at least a few days (August seems to be an outlier, at least at this point). Given that annotation-as-conversation is anchored in an easily referenced source text (unlike the more ephemeral threads of a Twitter chat), our team is learning an important lesson about social annotation – such activity has blurred beginnings, remains open-ended, and there is no hard start and stop. To test a playful analogy, the Marginal Syllabus creates both the temporal conditions for a scrimmage (that is, people playing together at the same time) as well as the field upon which activity occurs (that is, the playground where people show up to play at varied and different times).

A second trend: We have had, on average, about a dozen participants each month, including k-12 educators and administrators, higher education professionals, graduate students, non-profit leaders, and others. With groups of this size regularly participating, focal texts tend to get pretty saturated with annotations and replies. This raises some interesting questions about facilitation, as well as what might occur over the coming months. What if closer to 20 people participated regularly, would that overwhelm the text and create too many incoherent conversational threads? On a related technical note, a big thanks to Hypothes.is for the recent updates feature which really helps people to manage the flow of information during a live event like our flash mobs. And what if our participation numbers grow to the point where a flash mob structure creates more noise than signal? In that case, perhaps we might shift to an “annotathon” approach that can be scheduled over multiple days, as modeled by Maha Bali and Nadine Aboulmagd during a recent annotation conversation grounded in Maha’s text about digital literacies. These are but a few questions, among many, that have emerged as a result of our ongoing activity. Perhaps regular participants might raise other questions you care to see our organizing team address – our thanks in advance.

And finally, something else that happened at the tail end of 2016: A conversation between Remi Kalir and Jeremy Dean about Web Annotation as Conversation and Interruption for the Journal of Media Practice. It wasn’t too surprising to see some regular Marginal Syllabus participants jump into that conversation, too, and our thanks for growing an important exploration of web annotation as disruptive media.

This site uses Akismet to reduce spam. Learn how your comment data is processed.