This document summarizes the eight texts, author partnerships, and annotation conversations that comprise “Writing Our Civic Futures,” the  2017-18 Marginal Syllabus. For background on the collaboration between the National Writing Project and Marginal Syllabus, read this post on the Educator Innovator network.

Listen to a playlist of all “Writing Our Civic Futures” webinars and podcasts from the 2017-18 Marginal Syllabus. 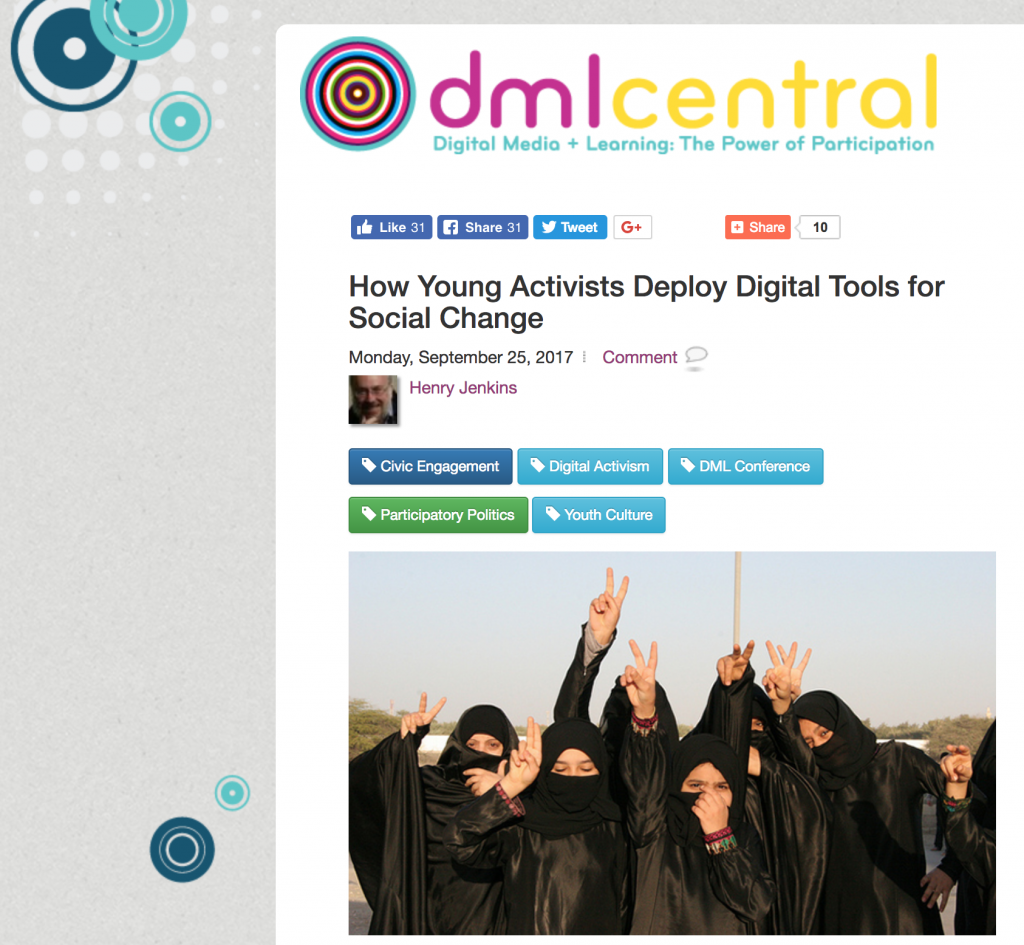 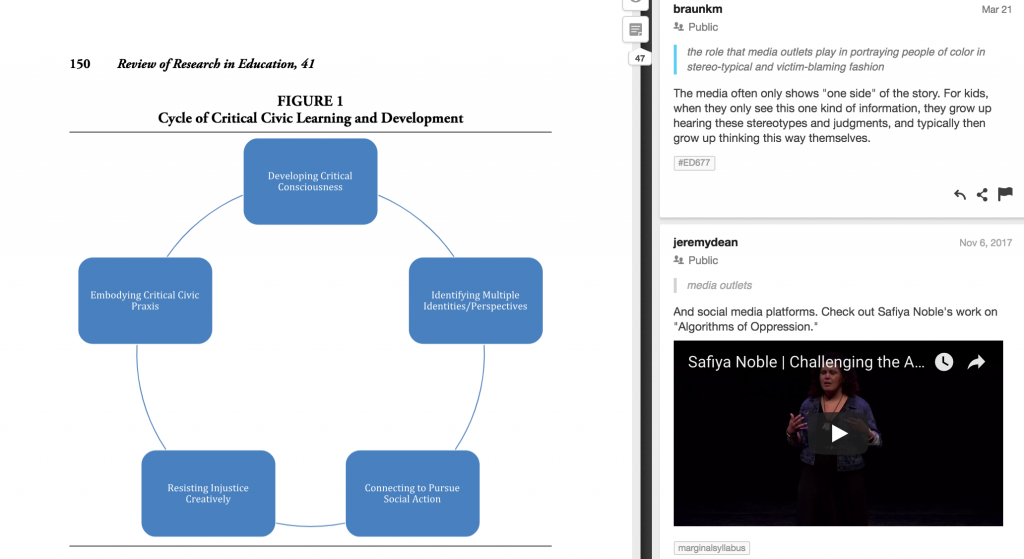 Conversation Context: In November we annotated Civic Participation Reimagined: Youth Interrogation and Innovation in the Multimodal Public Sphere, a chapter originally published in Vol 41, Issue 1, 2017 of American Educational Research Association (AERA)’s Review of Research in Education. Nicole Mirra and Antero Garcia, the authors, examine traditional conceptions of civics education and argue for approaches of civic interrogation and innovation. Both authors joined us to the discuss the chapter in this Educator Innovator Webinar.

December: Critical Literacy and Our Students’ Lives by Linda Christensen

Conversation Context: In December we annotated Critical Literacy and Our Students’ Lives, an article excerpted from Voices From the Middle, written by Linda Christensen. The piece tells the story of how Christensen shifted her view of students, from seeing them as “underprivileged,” to  seeing their brilliance, a shift that changed her teaching. She describes her responsive planning process for engaging students in critical literacy. Christensen spoke with us about the piece in this Educator Innovator webinar and we were joined by Andrea Zellner and Kevin Hodgson who shared their reading responses.

Conversation Context: In January we read Night Teaching, a chapter excerpted from Danielle Allen’s book, Our Declaration: A Reading of the Declaration of Independence in Defense of Equality. Allen recalls her experiences reading the Declaration of Independence with night students at the University of Chicago, and contrasts those working class students’ responses to the text with the responses of her more privileged mainstream undergraduate students. She shares reflections about political equality, freedom, and the power of language.

February: Educating for Democracy in a Partisan Age: Confronting the Challenges of Motivated Reasoning and Misinformation by Joseph Kahne and Benjamin Bowyer

Conversation Context: In February we marked up Educating for Democracy in a Partisan Age: Confronting the Challenges of Motivated Reasoning and Misinformation, by Joseph Kahne and Benjamin Bowyer, which appeared in the February 2017 issue of the American Education Research Journal. It presents a study that investigated people’s judgments of the accuracy of truth claims tied to controversial public issues. The authors found that even political knowledge did not improve judgments of accuracy but that media literacy education did. Kahne spoke with us in an Educator Innovator webinar and we were joined by Charlene Doland who shared her response to the work.

Conversation Context: In March we wrote notes in the margins of The Stories They Tell: Mainstream Media, Pedagogies of Healing and Critical Media Literacy, by April Baker-Bell, Raven Jones Stanbrough, and Sakeena Everett, which was published in the January 2017 edition of English Education. The authors identify six patterns of media injustice used to vilify people of color in the wake of racial violence. Social media, they argue, has potential as a tool to support healing, and can transform media narratives that perpetuate racism. All three authors spoke with us in this Educator Innovator webinar.

April: Educating Youth for Online Civic and Political Dialogue: A Conceptual Framework for the Digital Age by Erica Hodgin

Conversation Context: In April we annotated Educating Youth for Online Civic and Political Dialogue: A Conceptual Framework for the Digital Age by Erica Hodgin, an article that appeared in the Journal of Digital Media and Literacy in June of 2016. Hodgin reports on four high school teachers’ work on Youth Voices, a youth-powered social network, and details five stages of opportunity that built young people’s capacity for civic voice and influence. In this Educator Innovator webinar, the author spoke with us along with Paul Oh, who offered his reflections as a reader familiar with Youth Voices.

May: Introduction, From Inquiry to Action: Civic Engagement with Project-Based Learning in All Content Areas by Steven Zemelman

Conversation Context: In May we read the introduction to the book From Inquiry to Action: Civic Engagement with Project-Based Learning in All Content Areas, by Steven Zemelman.  In it, Zemelman provides practice-based examples and strategies to engage students in social action projects with a focus on amplifying student choice, strengthening engagement, and addressing injustices in the community. We were joined for this Educator Innovator webinar by the author, along with Heather Van Benthuysen and Mauricio Pineda, two educators who participated in his action research for the book.